Phosphodiesterase 5 (PDE-5) inhibitors were originally investigated for hypertension because of their ability to relax blood vessels. To researchers’ surprise, inhibiting PDE-5 was even better for improving male erection. That’s why PDE-5 inhibitors such as sildenafil or tadalafil are most commonly marketed for improving erectile function. Relaxing blood vessels may be beneficial for purposes of exercise. PDE-5 inhibitors have potential to increase endurance performance because it counteracts contraction of blood vessels in lungs [1].

Clinical studies have shown that sildenafil and tadalafil can improve exercise capacity in certain patient populations. A proof-of-concept study demonstrated somewhat increased aerobic exercise capacity in young adult patients with cystic fibrosis, a disease that reduces lung function [2]. 25 mg of sildenafil increased the VOmax approximately 5% after four weeks of use while a single 50 mg dose failed to increase VOmax significantly despite some tendency to do so. There is some data that tadalafil increases exercise capacity of patients with pulmonary hypertension . It must be noted that the study subjects were those who could not walk 4.5 km/h for 10 minutes [3] and about third of the patients suffered from headache as an side effect.

In diabetic but not in healthy women, tadalafil has been shown to increase glucose utilization in the muscle [5]. In cyclists, sildenafil did not improve the results in the context of 16.1 km exercise [1]. On the negatice side, tadalafil is associated with yet unexplained higher incidence of back pain in clinical studies. About 8.3% to 9.4% of men taking tadalafil suffered from back pain while only 3.4% of men in placebo group suffered from back pain — the risk is greater than two-fold [6]. There was no difference in blood parameters. Hence, the increased incidence of back pain lacks explanation. One might ask if the back pain is associated with increased strenuous sexual performance. Anabolic steroid users seem to use PDE-5 inhibitors mainly for sexual enhancement also [7]. In mice, PDE-5 inhibitors can increase the production of testosterone [8].

Don´t hesitate to ask it. 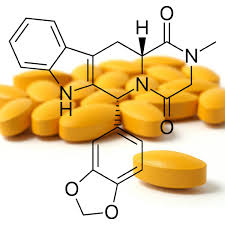